The Suwilaawks’ Wolverines Proving to be a Force on the Court.

Posted on February 1, 2013 by Principal | Comments Off on The Suwilaawks’ Wolverines Proving to be a Force on the Court. 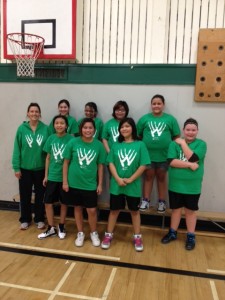 The Suwilaawks Wolverines made their way across town to face the skilled and talented Thornhill Tigers.  Travelling across two bridges, braving the mist and the fog … weary after a long day of studying and working hard at school, our girls put on an amazing performance.   As they stepped onto the court,  they regained their energy and suddenly came alive.  Tristen showed no fear as she skillfully handled the ball on the offence and there was no stopping Patricia as she was able to dribble through and around the opposing team with ease.  The game was a back and forth battle, but out of nowhere, Amelia and Libby came on with full strength and shut down the talented Tigers with their height and pure determination.  Tyler skillfully set up the plays and was able to bring the ball down the court with ease and elegance.  Fighting off injury, Selena played with heart and grit and made some outstanding passes.   Madison and Elizabeth are the kind of players who not only play an excellent offensive game but are relied on to make some great defensive plays.   Hard work and team spirit was evident throughout the game.  The Tigers are a force to be reckoned with and the Wolverines were ready to take on the challenge.   Coach Mann was overheard saying “This is one of the most talented groups I’ve ever worked with!”

Comments Off on The Suwilaawks’ Wolverines Proving to be a Force on the Court.